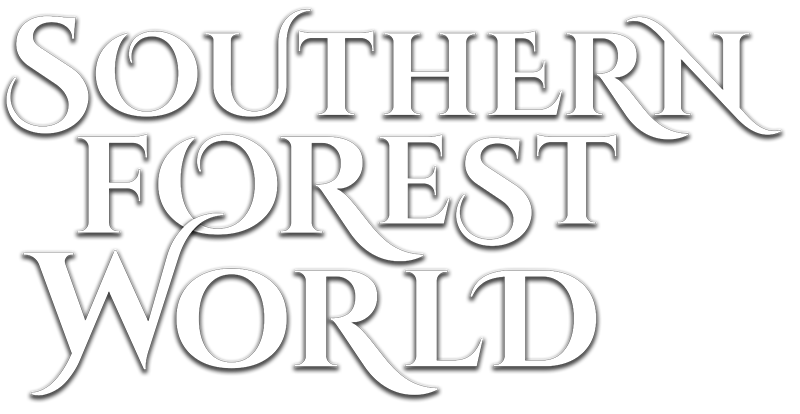 One of the things to do in Waycross is check out Stuckie the mummified dog!

Our facility is all about trees, & to be frank, they’re all a round us, we see them every day, so what’s to know?

When you visit us, you will be blown away by the information we have here and you’ll never look at a tree in the same way ever again!

If you’re looking for things to do in Waycross, click on the links below, Southern Forest World is a great visit for all the family whatever the ages.

The Entrance has an intriguing vista through a wide glass wall of a 38’ tall fiber-glass loblolly tree with walk-through spiral staircase. Four original oil panels on the left explain how man has used the forest from 10,000 BC to the present. The talking tree on the right gives a welcome message. A cabinet called the Trail of Honor, lists larger benefactors of the museum, with a separate narrow individual drawer for donors of $10,000 or more. A Plexiglas exhibit case holds examples of the flora and fauna of the Okefenokee Swamp, above and 4’ below ground.

This exhibit is represented after a walk through a simulated Plexiglas oak tree leading to a panel with landscapes of forest in the northern, southern, eastern, and western area of America. The Smithsonian Institute gave us this exhibit that has been developed for the American Bicentennial Celebration. It included wallpaper covered panels and tall round columns depicting historical information on the early use of products from pine gum and antiques (collected by our museum) of masts for ships, other wooden items such as wagons, furniture, tools, poles and more. It also features several peep holes in the columns that show a variety of views of forest scenes. In addition there is a large mural that shows the development of civilization utilizing products made of wood. A TV with a DVD is available for a variety of short movies.

Three dioramas, one with a tractor visitors can move by pressing a button. They tell the story of ground preparation, planting the seedling nursery, and illustrate the three stages of the growing tree ages 5, 15, and 25 years when they are ready to harvest. Photographs illustrate proper techniques used in forestry management. A Forestry Quiz Board has buttons to press for a correct answer. There are displays on ecology and the environment and on champion trees of GA. Exhibits two large dioramas on Hebardville, a mill town in north Waycross, and another on Billy’s Island in the swamp. Both received and processed millions of board feet of cypress between 1909 and 1926.

This featured in the back lobby in the original oil mural with specimens of some of the ferns and mounted animals of the swamp including a 493 pound make black bear that was a Georgia champion when he was killed by George Gilbert in 1983, just fourteen miles from this museum; a fox squirrel; a raccoon; and a small opossum reminiscent of “Pogo,” made famous with the swamp by cartoonist Walt Kelly. A Smith shop custom made in the 1930’s with special saws welded together and run by diesel engine for woodworking equipment was designed by B. B. Powell and donated by his family. A wooden eagle is there, carved from a section of a tree during a forest festival, and a piece of petrified wood brought from Baxley that was the very first artifact donated to us. Also there is a collection of ten varieties of pinecones prepared by Bill Lott and Johnny Oak. A giant cypress tree similar to the Sequoia trees in California is another of our fantastic exhibits and may be seen outside through the glass wall in the room, along with photos telling the story of its being found in the grove of similar trees in a remote section of Boyles Island near the Altamaha River just forty-five miles away. ITT Rayonier, Inc. went to a great deal of trouble and expense to provide it for us. Most residents have no idea that such trees are still growing in Georgia.

The Big Tree Room with mummified dog in a log

This has large back-lighted panels of photographs identifying 12 varieties of trees in their native forests located through Georgia with 4’ sections of their trunks and 5 examples of treated foliage. A giant fiber-glass tree surrounding a spiral staircase is a highly unusual exhibit and has a unique display of damage done by beetles. As one climbs through the tree to the 2nd floor, it is possible to see lighted vertical tubing that portrays the flow of xylem carrying water up the tree. A knothole for a bird or squirrel may be seen in route. Our astounding mummified dog in a log, brought by the Georgia Kraft Co. in Rome, is featured in Ripley’s Believe It or Not.

Our Navel Store Room has a 1/35th scale model of a fire still and an original oil painting of a working fire still. There were used extensively in the south to produce turpentine between 1834 and 1936. Used in an experiment station in Olustee, Florida, it was donated by John Laws. Photographs and a realistic exhibit with three preserved 9, tree trunks show how the gum was collected (specially 1700, 1904, and 1981); and carried to paper and pulp mills, then processed to produce the chemicals used in thousands of products with some element of pine tree. Lonnie Pope, from Waycross, patented several processes, including the use of citrus. Displays show collection equipment, including Varn Sleeve developed by K. S. Varn, in addition to a close-up photograph of one in use. Diagrams illustrate the modern ways of obtaining and processing chemicals. A typical pine stump filled with gum from a pine tree, often called “lighter’d” (for light wood), donated by Hercules, Inc. is on exhibit, as antique equipment and artifacts. Another large stump outside has at least two very early “cat faces” as the cuts are often called.

This features clothing and equipment used in space travel, many of which contain some element of a pine product. 7’ tall scale model of the Saturn rocket that helped put man into space, with 7 ½’ tower along with scale models of the lunar shuttle that put man on the moon. Also see the exhibit outside of our Moon Tree and other types of shuttles, including a 1/25th scale model exhibiting the time when the U. S. and Russian shuttles docked in space to begin the joint space program.

This area provides raised seating to allow for educational programs and video viewing.

This exhibit features diagrams of the paper-making process and samples of various sizes of paper (some with a diameter of over 3’) from which paper products are made.

This exhibit shows samples of techniques of cutting tree trunks for the most advantageous uses, types of saws, including one over six’ long, and additional information and photographs of the Hebard Saw Mill.

This exhibit has facinating information on the preparation and type of wood products and samples of finished products.

Features photos of their uses, preparations and types. Examples of a variety of poles are available for viewing.

We have one of the nation’s largest certified Slash pines that grew on Westvaco Corp. land in Ware County until struck by lightning in 1974. It measured 120’ tall, 32.8’ wide at its crown, and 11.8’ in circumference, and has a diameter of 41”.

27” Cross Section of a Cypress tree with a 9” Yellow Poplar inside.

Display on growth from seeds, parts of a tree, and continental forests.

We have both pine and oak trees hanging from the ceiling that show the differences in these types of root systems.

Destroyers of the Forest

This Exhibit shows Three Primary Destroyers of the Forest, wildfires, pine beetles, and urbanization. (Loss of 60 million stumpage in Ware County in 2007 wildfire.)

Features new or renewable types of fuel for power such as the Franklin Stove that uses smaller sizes of cut wood, wood pellets, chips, and solar energy to adjust temperature comfort for homes, commercial use, transportation, and other needs in the modern world.

PLUS OUTSIDE WE OFFER

This was donated by Union Camp in 1982. Used from 1900-1940 in the Savannah area for hauling trees from the forests to the mills. The cabbage Stack design assisted with preventing ashes from the stack starting forest fires.

Ancient 1700s logs floated to coastal docks to load onto vessels bound for Maine to provide masts for the sailing vessels that plied the oceans of the world. Both are long leaf pine. The 39’ log has a diameter of 29” at the base and was pulled up from the Satilla River. The shorter 14 ½’ log donated by James Stewart, was pulled up from Ox Box Lake off the Altamaha River in 2007. Called a squirrel log it was precut to a standard size before rafting to the shipping dock.

This 35’ square, which seats about forty. It was made in 1979 by Don Berryhill and George Johnson, restored by Boy Scout Michael Duberly and completely rebuilt in 2010 by Eddie Liles with wood donated by Varn, Inc.

Originally from Brasstown bald, probably the first used by the Georgia Forestry Commission. Donated to the museum in 1980.

We offer trails in the wooded area behind the building are a great way to see a natural forest environment. You will see many indigenous plans and trees.

The majority of our exhibits were created by Joseph Hurt Studios of Decatur, the Georgia Forestry Commission or an in-house exhibit designer/builder, Robert Ducham, but a few were done by others named at the exhibit location. Barry Nehr of the U. S. Forestry Service prepared some of the exhibit plans, as did Dr. Robert C. Smith. We are grateful to the two dozen or more forest-related industries and many individuals who donated the matching money for these exhibits as required by the Coastal Plains Regional Commission who gave the grant of $185,000 for the construction of the building. Together they are valued at over $500,000.

We are closed on major holidays

While you’re here
PlEasE ViSiT THeSe 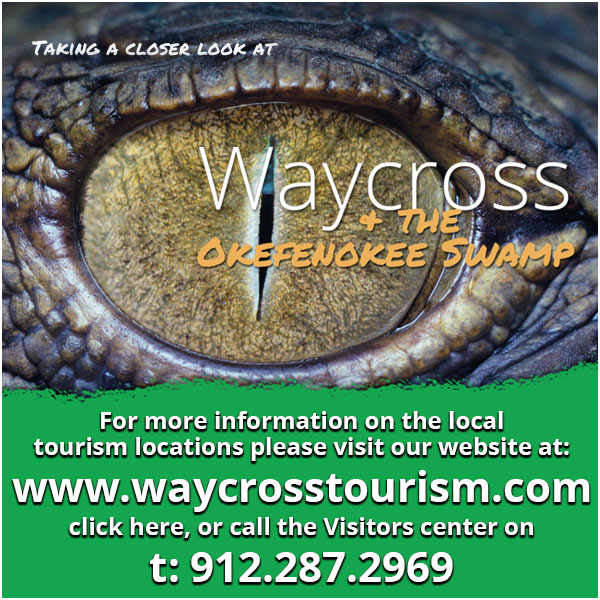 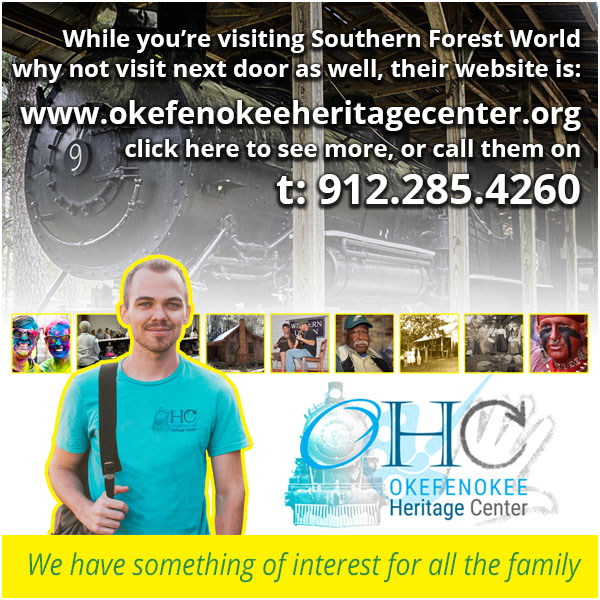 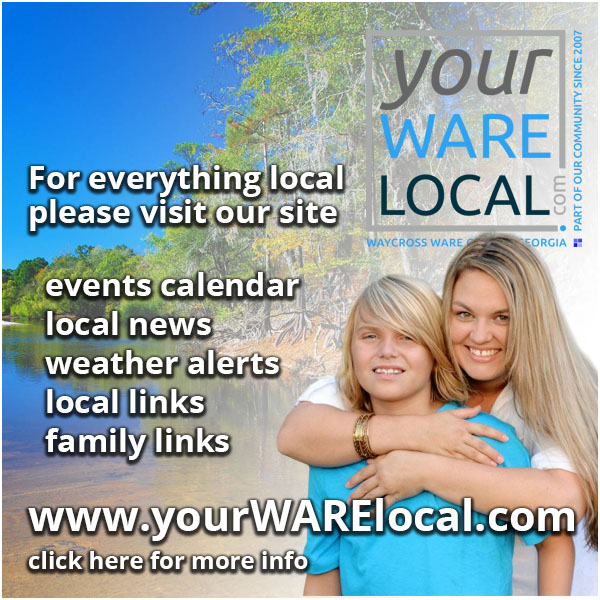